Starbase Brewing's third beer release is Lucky Launch Day Lager, a Mango Mexican-Style Lager. To brew Lucky Launch Day Lager, we first combine European grains and flaked maize in the style of a traditional Mexican Lager. Next, we add sweet and spicy American Noble hops to create a complex malty profile that is equal parts mellow and smooth. Finally, we throw in some crystallized mango to give it a tropical twist. Lucky Launch Day Lager pours crisp and clear, and boasts an aroma of softly spiced mango.

Superstition in the Space Industry

There's a long and storied history of superstition in the rocketry and spaceflight field. From SpaceX to NASA to the Russians, there are numerous quirky traditions that have been carried on for decades. Lucky Launch Day Lager pays tribute to these fun and superstitious ways.

Superstition at SpaceX can be traced back to the very early days of the Falcon 1 rocket program. Traditionally, every rocket launch has a mission patch created to celebrate the occasion. After the first three launches of the Falcon 1 ended in failure, there was only enough money for one more attempt before the company would fail. A four-leaf clover was added to the mission patch for the final launch — to symbolize the fourth launch, but also to add a bit of extra luck. The launch was a resounding success. Flight 4 was the first time SpaceX successfully achieved orbit and the first successful orbital launch of any privately developed liquid-propelled payload-carrying rocket. It paved the way for the Falcon 9 and Starship programs, and SpaceX would probably not exist if it weren't for that mission's success. The mission patch for Flight 4 of Falcon 1

Since this first successful flight, a small green four leaf clover can be found on every single SpaceX launch mission patch. Additionally, a very famous t-shirt from the early days of SpaceX was a plain black tee emblazoned with a giant green four-leaf clover on the back. Many employees and early fans still wear their "Lucky Launch Day Shirts" for all SpaceX launches. When launching on a SpaceX rocket, all astronauts sign a spot on the crew access arm of the launch tower right before boarding the rocket. This was highlighted during the Inspiration-4 mission in September 2021.

In addition, astronauts usually bring a plush toy and attach it to one of their chairs. While obviously cute, this toy also serves as an indicator of reaching zero-G. Plushes used in recent missions include a small smiling earth (Demo-1), a sparkly dinosaur (Demo-2), and a golden retriever (Inspiration-4).

NASA has many traditions of their own. Before a launch at Kennedy Space Center, all NASA astronauts must eat a meal of steak, eggs, and cake. 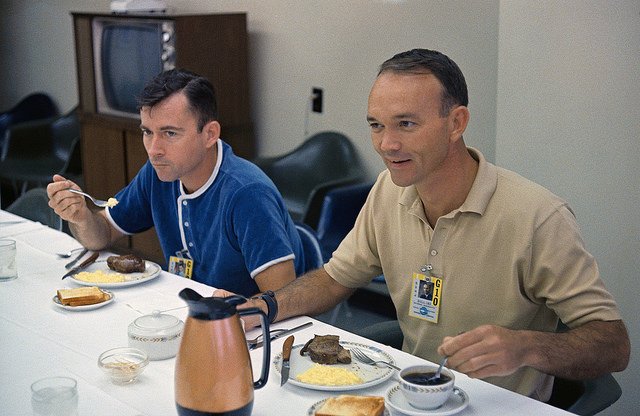 Similar to SpaceX, astronauts sign a wall with the NASA logo in a specific area. The entire crew must also play the card game Blackjack until the commander of the upcoming mission wins a round. 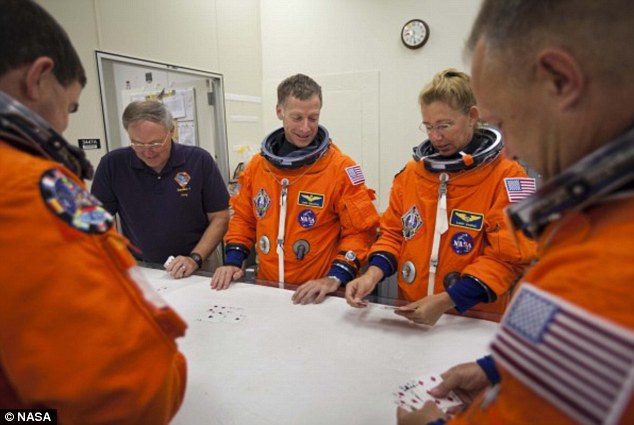 Blackjack before a launch of the Space Shuttle

Mission control gets in on the action as well. At Kennedy Space Center, mission control ate baked beans before every single launch of the Space Shuttle. 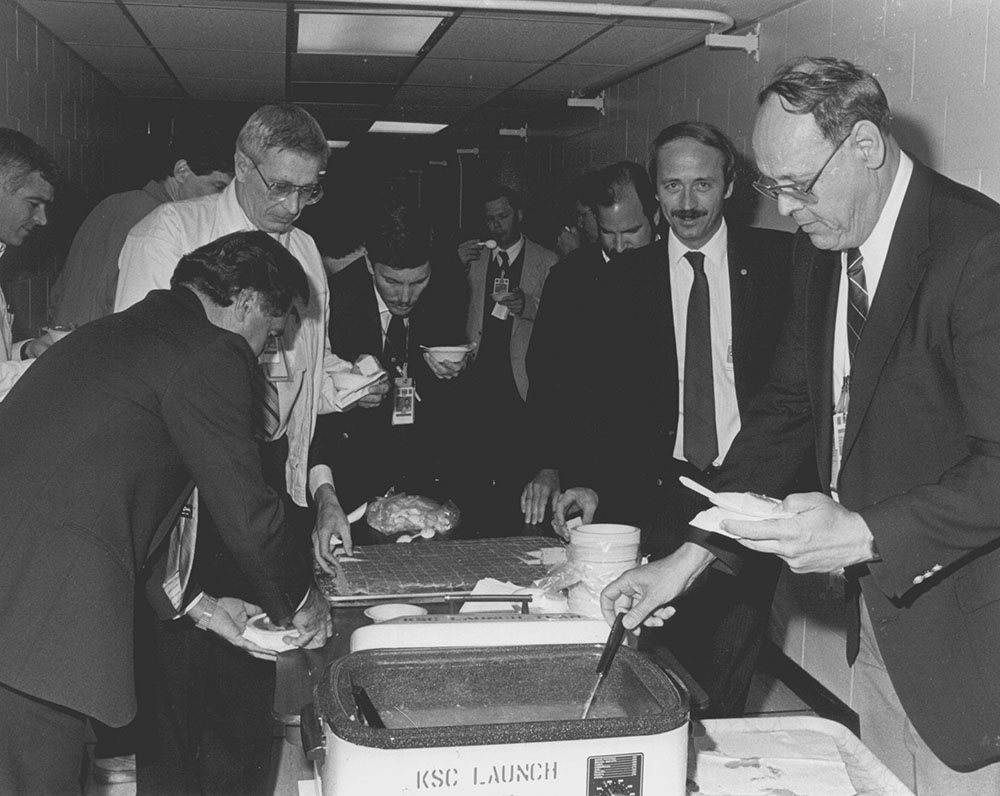 Mission Control at KSC eating beans before a Shuttle launch

At JPL, all critical events are preceded by everyone in mission control eating peanuts. Famously, there have only been a few occasions when peanuts were forgotten — two of those missions were delayed, and in the third, the spacecraft was lost after launch. Even Russian cosmonauts are superstitious! All rockets are blessed by an Orthodox priest before the flight. The night before a flight, cosmonauts always watch the film White Sun of the Desert. There are always cheerleaders near the launch pad to cheer on the astronauts as they board the rocket. And when sitting on the launch pad, astronauts can request any song to be played over the speakers from mission control. The most common requests are Russian love songs.

They have one more superstition that is even more unusual. When Yuri Gagarin— the first man to orbit the Earth — was on his way to the launch pad in 1961, he stopped for an emergency bathroom break to relieve himself on a bus tire near the launch pad. Since then, most Russians who have flown to space have stopped to do their business on a bus tire before the flight. Many women bring a container of urine to splash onto the tire.