It’s been a very busy week down at Starbase Texas, although today will also involve some news out of SpaceX’s engine testing facility as well! Even though the FAA Environmental Assessment is ongoing, it feels as if SpaceX is closer than ever to a full-stack flight of the Starship system.

Earlier in the week, the community watched on as two red mystery structures were assembled on wooden planks near the Orbital Launch Mount. At first, it was not entirely clear what purpose these structures would have, but then the carriage of Mechazilla was moved and lifted into position, sitting on the frame closest to the tower. The following day, the first catching arm was moved closer to the assembly and lifted into position. 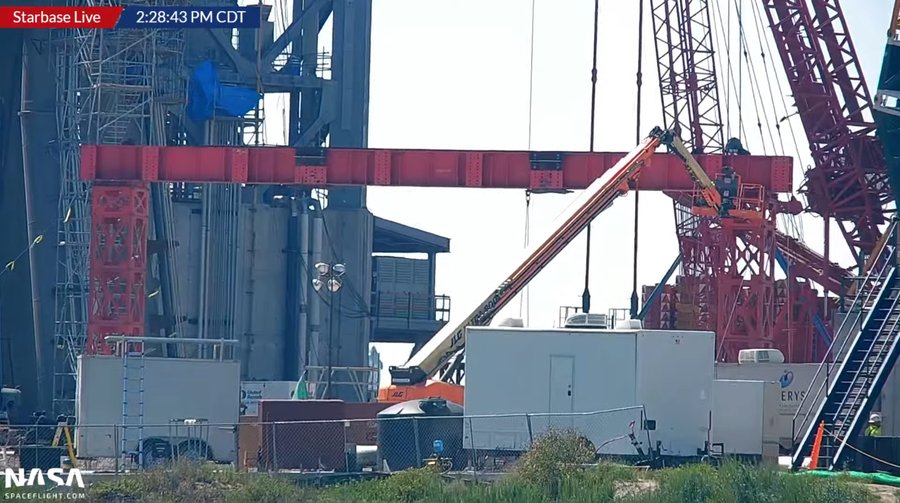 At the time of writing, the LR11350 is still connected to the arm as workers connect the arm to the carriage. Once the arm has been secured properly, the LR11350 will be able to disconnect from the lifting arm and prepare for the next lift. The LR11000 has also moved closer to the assembly and, at the time of writing, it appears to be preparing to lift the other catching arm.

Another major achievement this week is the installation of the final fuel farm tank for Orbital Launch Complex 1. This signals the end of the GSE program (at least until Launch Complex 2 construction begins), leaving only the Cryoshells left to be installed and prepared for use. Further testing of the Fuel Farm has been underway this past week, with small usage tests occurring in the early hours of the mornings. 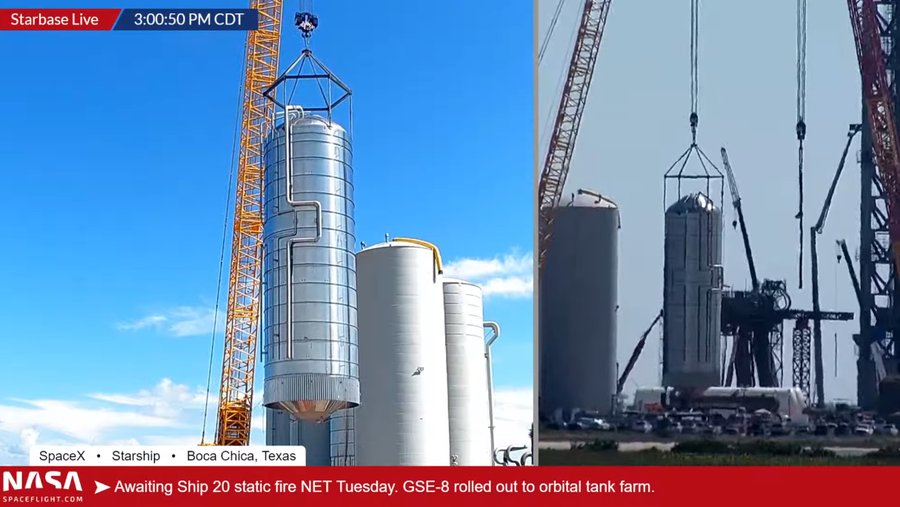 GSE-8 being lifted onto the pad. Source: NASASpaceFlight

Once the Fuel Farm is complete, SpaceX will be able to start loading propellant in preparation for Booster 4 testing and wet dress rehearsals of the full stack. Both of these are major milestones on the road to the first orbital test flight.

Earlier in the week saw the arrival of two extremely long and large propellant tanks being delivered to the Sanchez Site at Starbase. The Sanchez Site is the future location of the SpaceX propellant production plant, where the company will be making the fuel and oxidizer needed for all launches out of Starbase.


While progress was initially at a standstill due to the site being used for other construction activities (tower segment and Cryoshell assembly), progress has since ramped up. These two deliveries also indicate the intended scale of the propellant plant, with these tanks being much larger than any of the premade tanks previously seen before at Starbase.


One thing to keep in mind about the propellant production plant is that it will also likely go through a phase of rapid prototyping as SpaceX figures out the best way to produce propellant for future operations. The size of the Starship fleet needed for all of the proposed future operations is going to require a massive amount of fuel and oxidizer. If this was provided by a third party, SpaceX would be extremely vulnerable to price increases or supply pressures. By vertically integrating this area of operations, SpaceX will be able to figure out the best solution to fueling the future fleet while also maintaining efficient margins for operation.

Remaining on the South End of the Sanchez Site, multiple flights of stairs have been assembled for future use, although the location of where these stairs would be installed had been up for debate. It appears now though, that the future location of these stairs will be the new High Bay, with two of the staircases now being enclosed in the same external steel as the current High Bay.


It potentially tells us about the internal layout of the New High Bay as well. Instead of replicating the empty and clear space of the current High Bay, SpaceX appears to be preparing for a similar internal layout of the VAB. The VAB has multiple levels for workers to access different areas of the vehicles at the facility. It should be noted, however, that the VAB only ever constructed one type of vehicle at a given time. SpaceX currently produces two types of vehicles at Starbase, but it is yet to be seen whether the internals of the New High Bay will be for both.

A great local source of news from the McGregor test site, Reagan Beck, reported hearing a strange sounding Raptor engine test fire. Now while at this point, nothing is confirmed, in a previous interview with Tim Dodd, CEO Elon Musk mentioned that they intended to have Raptor 2 test firing at the site within the next month (September). While nothing appeared to have stood out about Raptor test firings in September, this could be the first sign of the first Raptor 2, or a less than nominal testfire of Raptor 1. The other big news out of McGregor, again thanks to Reagan Beck, is the first steel of the new Raptor Factory has been installed. This new Raptor factory is expected to start mass production of Raptor 2 when it comes online but will adapt and change the lines as the engine design matures to future versions. Ultimately the proximity of the engine factory to the test site will reduce the time between construction, testing, and dispatch, improving SpaceX’s capacity to expand the Starship fleet.