At the time of writing, Booster 4 is currently off of the Orbital Launch Mount and is now sitting on a transport stand next to Ship 20, biding its time while the final pieces of the Orbital Launch Integration Tower (OLIT) are prepared for installation. That's right, it’s Mechazilla install time.

For those who are unaware, Mechazilla is the current name for the catching and lifting mechanism for the Starship system. Instead of following a Falcon 9 or early Starship prototype leg approach, SpaceX has decided to go one step further and integrate the landing hardware into the Orbital Launch Tower.

This decision makes a lot of sense when you consider that the system would not be able to launch from anywhere without an OLIT or suitable substitute. It’s similar to the idea that a 747 cannot land at just any airport, and nor does it need to. The other reason this is a brilliant move is due to the mass savings on both the booster and the ship, improving performance and payload to orbit, which is arguably the most important metric in a commercial launch system.

Originally, it was expected that the first orbital test launch of the Starship system would be far too early for Mechazilla to even be installed, with SpaceX intending to use either the LR11000 or LR11350 for full-stack integration before launch. However, as mentioned in last week’s article, the time it’s taken to gain regulatory approval (which they still don’t have, but are now much closer with the draft report), has pushed the first flight back far enough that Flight 420 will now see Mechazilla in all of its glory.

Currently, there are no public plans or timelines for install and the testing that would have to follow. What is expected, however, is the process of Mechazilla’s install. The carriage that will support the weight of the arms and eventually the vehicles will be installed first. This will run along several rails that have been attached on all but the West column of the tower. Then, either the cables that will provide mobility to the system and/or the arms will be added. The order in which these will be installed is hard to predict at this point in time. There are a lot of unknowns about this as it is the first time something like this has been built at Starbase — although it won’t be the last if successful. 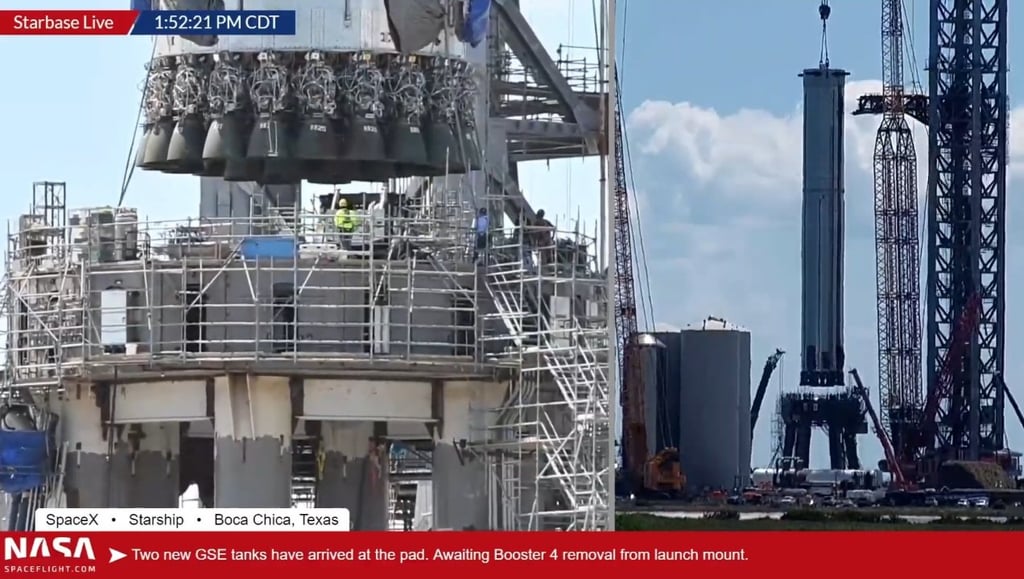 Booster 4 being removed from the Orbital Launch Pad. Photo: NASASpaceFlight

With that being said, we can estimate with a large amount of confidence that the first flight will not occur before late November/Early December. This is due to the current public comment period ending on the 18th of October, which will be followed by a comment review process that could take a few weeks or a few months. This first flight date also assumes a nominal preflight test campaign as well, which would be quite the achievement for a new vehicle, especially of this size.

The other major development is the removal of Ship 20 engines and the install of multiple thrust simulators on Suborbital Pad B. However, following the successful full-stack test it was clear that SpaceX had other plans. The thrust simulators previously installed were removed and no further action was seen for some time.

Although this would not be new to the program, the later suborbital ship prototypes were tested with flight engines installed. This is expected to be due to largely identical thrust structures within the ships, so multiple validation tests were not needed. Instead, the company chose to remove these tests, reducing downtime between vehicle tests.

Looking forward, it would be reasonable to expect a thorough testing campaign for both flight vehicles as SpaceX looks to use the time made available through the FAA approval process to reduce risk as much as possible. This will also be the first time that a full-stack is tested, so this testing cycle is likely to be unique to the first launch with future testing periods refined further in typical SpaceX fashion.